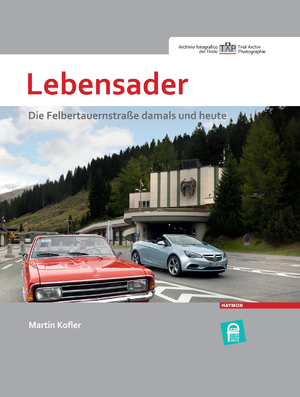 The new road served as transit road for tourists, because the trip from Munich to the Adriatic Sea was shortened for more than 100 kilometers. Apart from the discovery of the district Lienz by new tourists, for the locals the Felbertauern road has been especially important for the identity-establishing aspect: The First World War caused the separation of the South Tyrol from Austria and the new border cut off the Puster Valley from East Tyrol. The Felbertauern road realized the new traffic conjunction between East Tyrol and the capital city Innsbruck exclusively on Austrian territory.

The historic introduction covers the period from the medieval to present times. The first part of the book describes the efforts for the realization and the construction of the road from 1950 to 1967. The second part covers the commercialization of the road and other topics like frequency indicators and the toll charge, discussed controversially, the overcoming of the recent rock fall in 2013 and the present situation.

Martin Kofler, Mag. phil., PhD phil., Master of Arts, born 1971 in Lienz; graduated in History in Innsbruck and New Orleans; from 2011 director of the Tyrolean Archive of photographic documentation and art (TAP); publications covering the situation of Austria in the Cold War and the history of Tyrol during the 19th and 20th century.

Available in bookstores or for order via This email address is being protected from spambots. You need JavaScript enabled to view it.

Register and enjoy the advantages of the lightbox
Show Lightbox
Frame

With the continued use of this website you agree to the use of these cookies. More details

This email address is being protected from spambots. You need JavaScript enabled to view it.